Classy and Serene by Barbara Leavy

Most cabaret songs are story songs, and good cabaret performers are also good storytellers, whether their patter is about themselves, the songwriters and eras they favor, or the themes that define what is important to them. To interview them is to elicit stories, the more thoughtful of them creating narratives in which life and art are inextricably intertwined. For some the art of spinning tales may be in the genes.

As Valerie lemon tells it, her mother was a frustrated singer, and her father had a true gift for storytelling. Valerie herself has many tales to tell.

In the hands of a serious novelist, Valerie's family life in Ohio could constitute a family saga. The multiplicity of plots could also feed episodes of a daytime TV series. Valerie describes stress and trauma, but also the security of being much loved and the conflicting loyalties split love engenders.

Her parents divorced when she and her sister were young and a custody battle ensued, but she was saved by the strong, unconditional love of a beloved grandmother.

Then there were a series of step-parents, one especially loving and supportive, another like the stereotypical wicked step-mother. Step-siblings were acquired, some with serious problems that required Valerie's help. Her handsome and charismatic father became increasingly alcoholic. With her mother, Dee, whom Valerie describes as movie-star beautiful and gifted, probably frustrated not to have had her own singing career, Valerie engaged in a not untypical ongoing mother daughter conflict.

Her mother was probably the source of a Valerie Lemon trademark, her elegant clothing, for Dee would buy her daughter beautiful gowns at the Salvation Army and encourage Valerie to play "dress up." Today, besides being praised for her voice and warm personality, critics almost unanimously compliment Valerie for the gorgeous gowns she performs in.

One critic combined appearance and talent by referring to her "silken voice and chiffon phrasing." In any contest for best dressed cabaret performer, Valerie would be at least a Finalist.

Valerie was separated from Dee for a long period when growing up, but she praises the courage that allowed her mother to leave a seventeen-year-old daughter at St. Mary's woman's residence in New York so that Valerie could study at the American Musical Dramatic Academy. One anecdote Valerie recounts constitutes a piece of cabaret history: when her mother opened a restaurant with entertainment, someone urged her to audition his son, who was immediately hired.

That son was Michael Feinstein and it was Dee who gave him his piano bar gig. Another side of Valerie's young life allowed her the spiritual serenity she would continuously seek, becoming a Buddhist for two years (when it was fashionable in the per forming community), today continuing daily to practice yoga and to meditate. In Ohio, Valerie lived near water and open Fields, able to enjoy solitude. She would fish alone, for example (her father dug up the worms) or sing aloud to the vast spaces around her.

When she first heard Doris Day singing Secret Love, Valerie recalls, she could particularly relate to the words, "now I shout it from the highest hill." She treasured these respites from the turmoil around her and early on recognized the value of achieving serenity.

New York, however, is anything but a serene town. Valerie's account of her years there could offer a comic writer material to create another Wonderful Town, although the sister to whom she would eventually become very close did not accompany Valerie to the Big Apple.

Life became serious and demanding for the next few years, but it also contained a potential for humor and slapstick. The terrified, shy girl on her own but at the same time living under the supervision of Hungarian nuns. Going to a school situated in the Bowery, then a particularly seedy part of town, with the omnipresent possibility of encountering a Charlie Chaplin-like tramp.

Auditioning for and getting a part in a national tour of The Student Prince, the good money she earned burning a hole in her pocket that eventually created a confrontation with her father. A stint at modeling and the need to stave off "dirty old men." Working at the restaurant Mrs. J's Sacred Cow where her customers were also aspiring stars, some going on to become great successes (and remaining Valerie's friends).

Singing to the customers waiting for food. Playing Movie Trivia with Fred Ebb and trying to hold her own by sneaking off to the cashier, who had a prodigious knowledge of film history. Meeting at Mrs, J's wise guys of various ethnic persuasions, but also diplomats, one of whom tipped Valerie 100 dollars every time she sang Don't Cry for Me, Argentina.

And, much later, after studying drama and dance and frequently singing with Marvin Hamlisch in concert, rushing off to one in Philadelphia as a last minute replacement (Valerie had only hours before show time), desperately trying to memorize the lyrics of a song she had never before sung.

Romance writers would find a plot in Valerie's account of her relationship to her now-husband Bob Rendon, whom she virtually fell in love with at first sight and still considers the love of her life. There was a rocky period between their first meeting and their marriage years later, and Valerie recalls periods of loss and depression before the two of them joined their lives - and created a family. Bob is Vice President of Sound for Production Resource Group, and his annual grand event is the Tree Lighting at Rockefeller Center.

The birth of daughter Marianne filled a void Valerie hadn't even know was there, and she recalls that she loved the "mommy" role while raising her child, who is now a teenager and aspiring performer. But non-fiction writers might include Valerie in studies of women performing an ongoing balancing act as they move between commitment to family and a quest for personal fulfillment that takes them out of the home.

Valerie feels lucky that Bob is so supportive, willing and able to help finance her career (it is very important to her that she now be able to support her own projects), but at the same time, she is conscious of the ten years she put performing aside. Before that, while still I engaged, she had yielded to the urging of Val Ryder and created her first cabaret act, discovering she loved cabaret, the art form, the people, and the freedom of expression and of creativity involved in putting together a shaw.

Valerie relishes the exchange of energy between performer and audience when the "fourth wall" comes down. Years later, focused on family life, Valerie attended a friend's cabaret show and learned about the Cabaret Symposium at the O'Neill Center. Attending herself was a pivotal experience and Valerie speaks with enthusiasm of her master classes and the teachers she had there. With help and encouragement from others, she created a new show, The Way of the Heart, which she recorded as her debut CD.

Valerie's interview for Cabaret Scenes can read like the personal memoir of one recounting a spiritual as well as physical journey through the stages of her life and career. She wants to repay the help and encouragement she has received by "giving back," and to this end, she frequently performs in hospitals and nursing homes, acutely sensitive to the ill and suffering.

A step-sibling had suffered epileptic seizures. Another aspiring singer at St. Mary's was afflicted with a particularly severe form of multiple sclerosis but still encouraged and taught Valerie. During a year as a cruise ship entertainer, she witnessed the extremes of luxury and poverty among the poorest people on earth. Valerie often performs benefits, such as one for breast cancer hosted by Lynn Redgrave.

Letters of praise and gratitude have come to her from Hearts and Voices and the Actor's Fund for bringing the joy of music to sick people.

In a surreal story, Valerie tells how pain and illness link her to Jane Froman, who had been seriously injured in a plane crash but bravely continued to entertain. After enduring long periods of undiagnosed pain and, eventually, abdominal surgery, Valerie convalesced at home on strong pain killers.

One night, as she tells it, a "gorgeous woman" appeared to her in a dream, say ing, '''Hello, Valerie, I'm Jane Froman.'" Not yet recovered, Valerie made a torturous trip to her computer and googled Froman: "This picture popped up, and it was the woman from my dream."

Describing this "very strange metaphysical experience," Valerie also concedes she had seen Susan Hayward play Froman in the film With a Song in My Heart. A committed materialist or skeptic might suggest that painkillers unlocked other, previously forgotten memories of Froman. But even so, this would not alter Valerie's strong belief in a spiritual realm not reducible to the mundane.

She went on to develop The Jane Froman Songbook-A Song in My Heart, as a cabaret show and CD. The show was co-written with Eric Michael Gillett who also served as director. Today, remembering the thrill of singing for twelve years with Marvin Hamlisch and a full orchestra, Valerie is trying to acquire the necessary funds to sing the Froman Songbook in full concert.

She is proud of taking the Froman show to hospitals and of watching eyes light up when she performs. Dee regrettably suffers from Alzheimer's disease and has forgotten Valerie's name, but when Valerie visits and the two of them sing together, Valerie marvels that her mother still remembers the lyrics.

What kind of books does Valerie Lemon read? She apparently has an extensive library of self-help books and describes how she continuously works on improving herself so that she may better reach out to others -- her family, her friends, her fellow performers, those in need.

There is no self-congratulation in Valerie as she pursues a spiritual life. Probably the most accurate portrait of her by a critic is that she is "classy and serene." 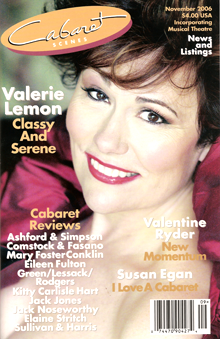